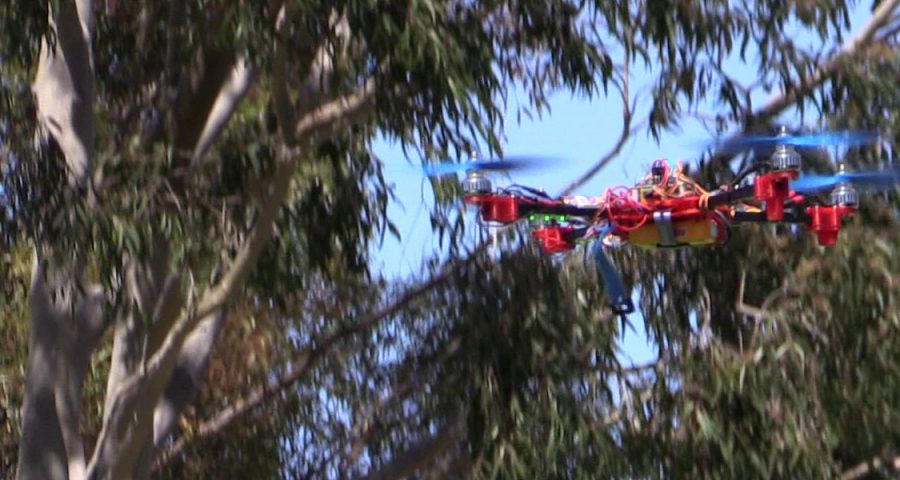 As discussed previously, I recently put together my first quadcopter. It used a 3D printed frame, which was easy to assemble and modify – but also a little too easy to break, I’ve found.

So, I decided to do up a new design, and see if I could put together something that was a little more resilient.

The previous frame is entirely 3D printed. It consists of six structural components – a lower plate, four arms, and an upper plate – with the arms sandwiched between the two plates. All electronics mount on top of the upper plate, with the battery strapped beneath the lower plate.

From a functional perspective, this works well for me. What I want to do is to make it sturdier and easier to repair (because it’s probably still going to break no matter what I do). However, I don’t want to add any significant weight – if anything, I’d like to make it lighter. So, just beefing up the existing design isn’t really an option.

In summary, I want something that:

Many quadcopter frames solve the weight-to-strength question by being made out of carbon fibre. However, I was against going this route for a few reasons:

That said, it was hard to deny the benefits that are inherent to a CF frame, namely:

I decided to adopt a compromise that would give me a little bit of both options.

The central ‘hub’, consisting of the upper and lower plates – will remain 3D printed. So will the end section of each arm that the motors mount to. The hub and motor mounts are the parts that are most likely to need changing or revising, and they’re also the sections that seem to break least often on the current frame. The arms are the parts that break most often – and it’s hard to make them stronger without adding to their weight.

Therefore, the bulk of each arm will be replaced with a length of carbon fibre tubing – adding strength, reducing weight, and removing a sizable chunk of the required printing.

I did a bit of browsing, and found that HobbyKing sell square carbon fibre tubing – 10mm x 10mm in various lengths. Round tubing seemed to be more common, but I thought that the square tubing would provide an easy means of ensuring that each arm doesn’t rotate out of alignment. The tubing was inexpensive, so I could stock up on spares in case a piece did break.

With the dimensions of the carbon fibre tubing I sat down to design the frame. Rather than rework the existing design, I decided to start from scratch.

First I designed the central hub. As with the previous design, it consisted of upper and lower printed plates. The lower plate had mounting holes in the for a power distribution board, slots for cable ties, and brackets in each corner where the tubing would slot into place as the arms.

The top plate is a simpler, flat shape – there are mounting holes for the main electronics, and also holes that match up with the arm brackets on the lower plate – allowing the top plate to be pulled down onto the bottom plate, clamping the arms in place, as the screws are tightened.

Then came the motor mounts. Like the central hub, these were made out of two pieces each – an upper piece, which was the larger, with mounting holes for the motor, and four holes around the tubing, and a lower piece, which clamped around the tubing and matched the four holes in the upper piece. Again, once the screws were tightened, the two printed pieces would clamp the carbon fibre tubing tightly.

This arrangement means that the length of each arm is determined by the length of tubing used – so it’s possible to cut the tubing to length if I wanted to adjust the arm lengths. It also means that I could easily remove and replace a broken piece of tubing if I needed to.

The electrical system on this quadcopter is almost identical to the previous model. I’m recycling most of the parts across from the old build to the new build, so if you want to know more about the electronics, check out the previous post here.

With one small addition…

When flying the previous quadcopter, I’d noticed that it was pretty easy to lose track of which way it was facing. Whenever that happened I tended to crash shortly after – I think this is a pretty common experience for those who are new to flying these sorts of things. Looking around, there were a few common suggestions to address this:

The first of those two points is fair enough – I found that as I got more practice in, I was losing track of the orientation less often. However, it was still happening to me every now and again – particularly when flying far away – so I decided that I’d try the second suggestion too, and make the orientation more visible.

One trick that I’d already tried on the previous quadcopter was to use different coloured props for the front and rear motors. I experimented with using red and black – this helped at close range, but it was hard to see at a distance, especially when the motors were running…

One common solution is to add coloured LEDs to the quadcopter – that way, you can determine the orientation from the differently coloured lights. I decided that I’d give this a go. Fortunately, the flat underside of the carbon fibre tubing that made up each arm was wide enough to attach a strip of LEDs to.

I had a quick look around and saw that HobbyKing and others sell short lengths of LED strips in different colours for just this application – that might have been a good option. However, I had a few metres of 12V RGB LED strip left over from a previous project – so I just cut four short lengths from that, attached them to the arms, and hardwired the front and back to be different colours. Because I’m running a 3S battery, the battery voltage should range from 10 – 12.6V – the 12V strip will tolerate that happily, so the easiest option is to power the LEDs directly from the battery voltage.

I’ve taken this design for a few flights so far.

It seems to be sturdier than the previous design, and definitely breaks less frequently. However, I’ve had a couple of bad crashes, and I’ve still seen parts broken when that happens. The carbon fibre arms are a lot tougher than the 3D printed parts, so when I do crash it tends to be the motor mounts that break. That’s not so bad – these are pretty small and quick to replace, and it’s easy to print off a few spares. I haven’t had any of the arms break yet, but I suspect the centre hub would probably break before that.

The design is up on Thingiverse if anyone wants to try a similar build.

Update (August 2014): I changed the design of the motor mounts to make them sturdier, and they no longer break in a crash – the central hub breaks instead. An interesting lesson in failure modes! I think I’ll be going back to the original motor mounts, as they are the easier part to replace.

Update (October 2018): Wiring diagram has been tidied up.